“The people who
make you who you are,
are your family."

Kids being raised by same-sex couples are growing in numbers worldwide. We are in a Gayby-Boom. But who are these kids? What do they think about having same-sex parents? And do they face different issues to other kids? At a time when the world is debating marriage equality, these questions are more pertinent than ever. Told from the perspective of the kids, Gayby Baby is intimate and sometimes humorous account of four children and their families. 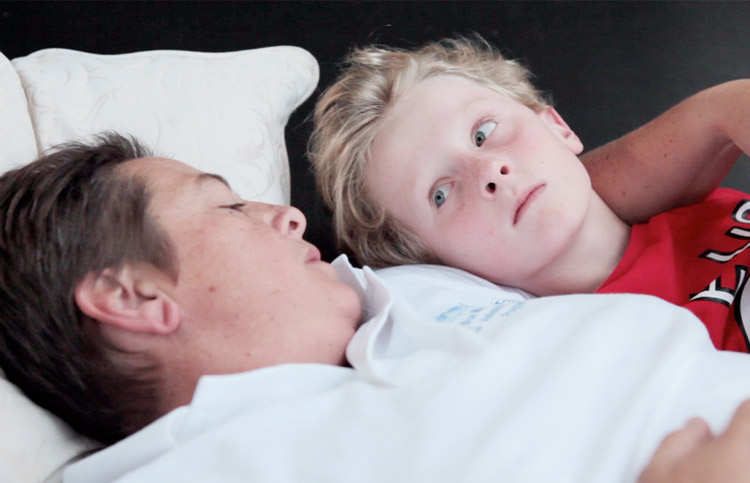 10 year old Gus is passionate about WWE wrestling. At a time when he’s discovering his masculinity, he finds its macho world alluring. But the violent wrestlers encapsulate everything Gus’s mothers dislike about masculine culture: these men are not their idea of good male role models. With a big wrestling show coming to Sydney, Gus must change his mothers’ views if he’s to attend. 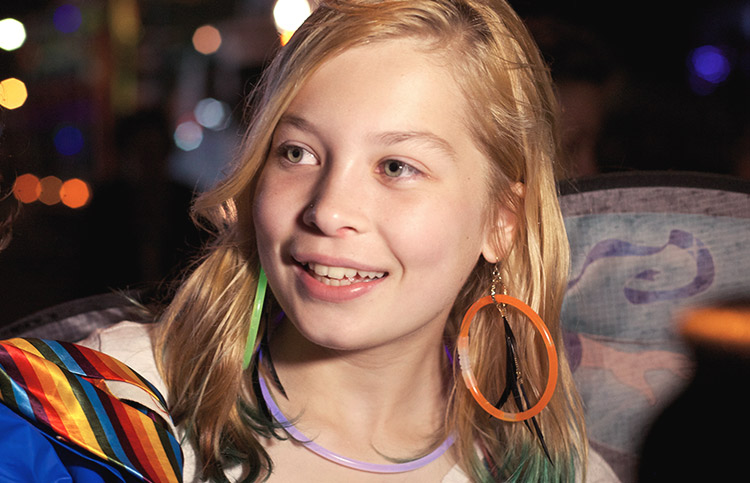 12 year old Ebony struggles to find her place in the outer suburbs of Sydney. She dreams of being a pop singer and hopes to get into the prestigious Newtown Performing Arts High. But getting into Newtown is not just about singing, the school is in a bohemian inner-city suburb where Ebony feels her and her family would be accepted and understood. But with the audition looming, Ebony is soon forced to ask what matters most in her life. Maybe getting into Newtown isn’t everything. 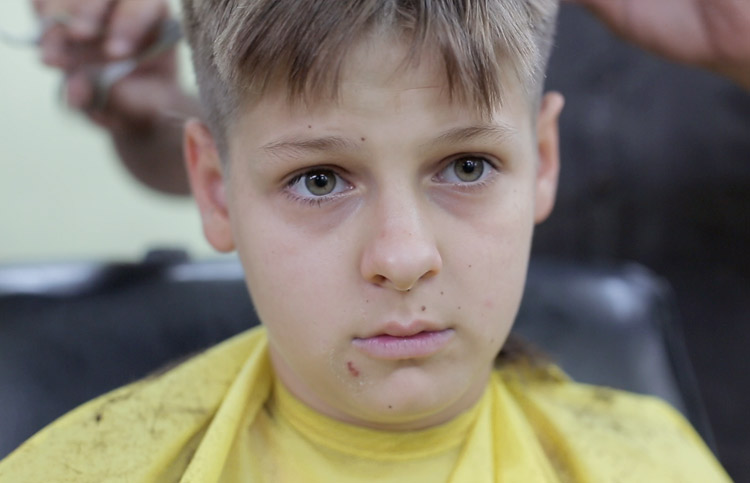 11 year old Graham can’t read; it bothers and embarrasses him. Having been neglected by his birth parents and never taught to speak, Graham is desperate to become literate. But his quest is complicated when his dads move the family to Fiji, a conservative place where they do not feel comfortable to be “out”. Faced with hiding his family and re-establishing himself in a new country, Graham’s goal seems ever more distant. When his teacher sets an assignment where he must write and perform “The Story of Me”, all Graham’s fears collide. 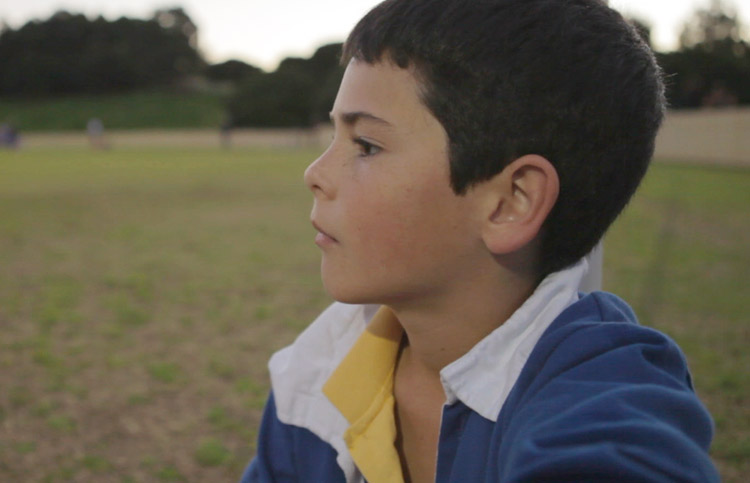 11 year old Matt is in the midst of an existential crisis. His family attends Church and his birth mother is strong of faith, yet the pastor says same-sex couples are a sin against God. The disconnect between his mothers faith the pastor’s admonitions has got Matt questioning everything. In answering life’s biggest questions, Matt must stand up to God, the Prime Minister, and perhaps most importantly – his mother.

Maya is an Australian filmmaker with a focus on directing for documentary. After winning a scholarship for Sydney Film School and completing a BA Media & Communications, Maya made Richard: The Most Interestingest Person I’ve Ever Met. Her award-winning short TWO screened at festivals internationally and she was awarded Best New Documentary Talent of Australia at AIDC, Adelaide Film Festival. Her recent film Growing Up Gayby, made in collaboration with Charlotte Mars, broadcast on the Australian Broadcasting Corporation (ABC) in 2013.

Maya has spent the last four years filming in the homes of children being raised by gay and lesbian parents. Gayby Baby was selected for Good Pitch Australia 2014 and premieres at Hot Docs, Toronto 2015. The Gayby Baby team is now rolling out a social impact campaign to promote family diversity in schools and communities.

Charlotte is an emerging producer, writer and director with a passion for femalemade content. Previously, she was the development manager for NBCU’s Matchbox Pictures, during which time she created and developed many original projects and worked on award-winning film and TV content such as The Slap (ABC1), Devil’s Playground (Foxtel), Underground: The Julian Assange Story (Ten), Leaky Boat (ABC1), Maximum Choppage (ABC2) and the upcoming Deadline Gallipoli (Foxtel).

Charlotte produced the ABC documentary Growing Up Gayby, the short drama From Here, which screened internationally, and she was also an inaugural ArtStart Screenwriting Fund recipient, a 2013 Spirit of Youth Award finalist and recipient of a Metro Screen grant to direct her short drama Awake, which premiered at Flickerfest 2014. In 2013 Charlotte founded Marla House with Maya Newell and together they have made the feature documentary Gayby Baby, which will make its premiere at Hot Docs in 2015.

Billy Marshall Stoneking is a writer/producer, & poet. He has written and produced a number of documentaries, including a feature-length film biography of Jungkarta Tjupurrula, Nosepeg’s Movie and Desert Stories (writer/narrator) for SBS-TV, which chronicles the development of bilingual education on Aboriginal settlements and outstations west of Alice Springs in the 70s and 80s.

His many film, television and stage credits include the features, Seeing the Elephant (writer/producer) and Chopper (principal script editor), as well as being series writer on Mission: Impossible (Paramount Television) and author of the critically acclaimed stage play, Sixteen Words For Water.

Rochelle edited the hit musical feature Bran Nue Dae, the critically acclaimed documentary series First Australians, the UN Peace Media award winner, Lani’s Story, and the highly awarded feature drama, Mabo, starring Deborah Mailman. In 2010, Rochelle received an AACTA documentary editing nomination for The Tall Man and in 2013 an AACTA nomination in drama editing for her collaborative work on Tim Winton’s The Turning. Rochelle edited Miss Nikki and The Tiger Girls, a feature musical documentary set in Burma during the change of the regime. Miss Nikki was selected for the prestigious IDFA and selected in competition for both Sydney and Melbourne Film Festivals in 2013. In 2014 Rochelle edited After The Wave, a feature length documentary about the massive forensic effort that took place after the 2004 Boxing Day Tsunami, which screened across five continents to mark the ten year anniversary.

Max Lyandvert is a composer, sound designer and director whose work with theatre companies has garnered him many awards. Max has won two Helpmann Awards and received seven Sydney Theatre Award nominations, another Helpmann Award nomination and a Green Room nomination. Max has worked extensively with the STC and also with Company B, State Theatre Company of South Australia, Malthouse Theatre, ICA, QTC, Legs on the Wall, Hothouse Theatre and Griffin Theatre Company. In 2008, Max composed choir arrangements for the film Hey Hey It’s Esther Blueburger starring Toni Collette. In 2012 Max was Composer and Sound Designer for STC’s Gross Und Klein which starred Cate Blanchett. He was composer on Matchbox Pictures’ award-winning miniseries Devil’s Playground and the feature documentary Gayby Baby.  He is currently working as the composer on Porchlight Films mini-series The Kettering Incident along with STC’s production of Endgame.

Andy has worked at Soundfirm in Sydney since 2000 and has been the in-house Re-recording Mixer since 2005 and Sound Supervisor since 2011. His time there has seen him experience every facet of sound post production for film and television, from sound mixing on Kriv Stenders Red Dog, ADR recording on The Lord of the Rings trilogy and sound editing on James Cameron’s Deep Sea Challenge. When he’s not filling his ears with sonic sensations, Andy enjoys spending time with his young family in the inner west suburbs of Sydney.

Andy was supported on Gayby Baby by:

Leah Katz as Dialogue Editor – Leah is a Freelance Sound Editor and Designer living in Sydney Australia. Her credits include Happy Feet, Animal Kingdom, Red Dog, Candy, Killer Elite, Tomorrow When The War Began, Charlotte Gray, Oranges and Sunshine, Son Of A Gun and many more. Since starting a family she has supervised on three features, I Frankenstein, Manny and Elixir, and two feature docs, Only The Dead and Gayby Baby. She loves her job and that each project brings it’s own unique experience. She is especially proud to have been part of the Gayby Baby team.

Brooke Trezise as Atmos & Effects Editor – Brooke’s film sound career has taken her to the belly of such beasts as The Rover, Animal Kingdom, Red Dog, Mao’s Last Dancer and Wish You Were Here for which won the ASSG Best Sound Design 2012. She has worked as a sound and picture editor across the world and has directed a short film which toured internationally.She also holds an advanced diploma to prove that she is a certified sound nerd.

Together Maya and Charlotte are MARLA HOUSE, a production house that revels in telling stories that are transporting, nuanced and a little bit subversive.

More than a production company, this “girl house” is an extension of the relationship between Charlotte and Maya, and a hothouse of artistic women-told stories. The company was founded during the making of Gayby Baby out of a belief in the transformative power of screen stories and the creative magic that happens when rebellious women gather under one roof.

SUPERGRAVITY Pictures produces, markets, and distributes longform filmed entertainment directly to passionate audiences around the world. SUPERGRAVITY previously released the Justin Chon and Kevin Wu starring buddy comedy MAN UP, the highly buzzed thriller THE CHOSEN starring Kian Lawley (which hit #1 on the iTunes Horror chart), and PREMATURE, a comedy special with Elliott Morgan. The studio has a deep pipeline of projects coming in 2016 and is in production on a Ray William Johnson hosted documentary feature film. SUPERGRAVITY was founded in late 2014 by Max Benator and Marc Hustvedt. To learn more, please visit www.supergravity.co.

Headquartered in Los Angeles, Heard Well is the first music label entirely powered by social tastemakers and their communities. At Heard Well, founding partners Connor Franta, Andrew Graham, and Jeremy Wineberg, leaders in the digital media and music spaces, seek out and spotlight emerging talent in the music industry and pair them with influencers. Heard Well simultaneously gives influencers a platform to showcase their genuine love of music, while also monetizing the artistry of their music partners. Albums released through the label have consistently placed in the top-ten on the Billboard and iTunes Top Charts. To learn more, please visit www.heardwell.com.

Receive e-newsletters – We don’t send them often, but when we do they’re worth a click!